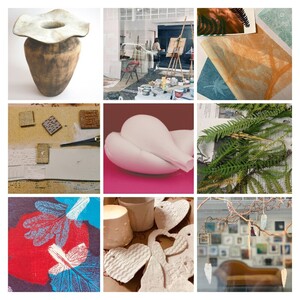 Galleri VOX is an artist studio providing a creative workplace for people with mental health issues, in Bergen, Norway.

Galleri VOX was set up in 2004 as a unique pilot project, and is still the only one of its kind in the country. In addition to a large studio where each participant has a workplace, there is a ceramic room, printing area (with a small press), a small room where we can do limited sculpture work and a kitchen which we also use as an internal exhibition space. We have place for 16 participants, who come on fixed days (generally 2 or 3 days a week) to work on self initiated projects.

Galleri VOX also runs a small gallery which is situated on the ground floor of the studio building and since 2005 have had over 50 exhibitions showing work of Galleri VOX members and invited artists.

Members of Galleri VOX also have the opportunity to work on public art projects with support from project leaders. Projects have been installed in Bergen City Council, Norwegian Labour and Welfare Service (NAV), Salvation Army and Hotel Klosterhage.

Members have a creative background and their mental health disability must be recognised by the Norwegain Labour and Welfare Services.

There are four paid positions: a fulltime leader and three part time (50%) creative project leaders. All employees have a creative background, rather than an education in arts therapy or psychiatry.

Galleri VOX is funded by Bergen City Council and Norwegian Labour and Welfare Service (NAV) and overseen by Fretex Jobb og Oppfølging AS (a social enterprise branch of the Salvation Army).

In 2011 Prosjekt RÅ (Project RAW) was formed, to create a forum for Outsider Art at Galleri VOX. Have a look here for further information.